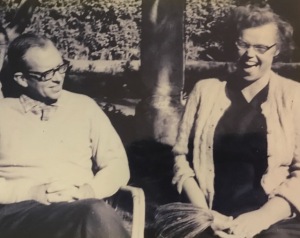 When my mother asked me to write her eulogy she said, “It is going to be hard to try and figure out the words for what I’ve tried to say with my life over the past 89 years.” She was right. It is hard, but I will do my best.

The fact that my mother was bigger than life is both our comfort and our heartbreak. Heartbreak–let’s get that word out in the open. She would not want me (or you) to dwell in heartbreak any longer than we have to. She lived her life as proof that the worst can happen and you can still go on one step at a time until joy regains its foothold on your life. For Mom, heartbreak was never an excuse to avoid joy. My mother taught us that when we fall apart, we hold it together. She taught us to keep going, because she knew that life would get better. Easier. More beautiful.

Early on, my mother took fate by the hand and they traveled together as choice and chance. Chance was the invitation; choice was her response.

By chance, she found a poem by John Updike in the New Yorker Magazine. She chose to tuck it into her wallet to read and reread. She said she didn’t remember the title, but remembered the yearning for love. One night, a thief came up the fire escape and stole her purse through an open window. The purse and wallet were later recovered, but the thief kept the poem. “He must have needed it,” my mother said. And she pointed out that she no longer did, because by then she’d found love.

It was by chance she found love when she met my father on a streetcar at DuPont Circle. There was no question that he was the one. Not in her mind. He, on the other hand, took some convincing. When he came to Washington he had been given one piece of advice: the best way to advance in Washington was never to get married and have children. That advice slowed him down, but it never stopped her. She lived across the street from him and then when an apartment opened up in the building next to him, she moved in. When he asked why, she responded that she’d read in a magazine that nine times out of ten the boy marries the girl next door. They may have met by chance, but my father didn’t stand a chance.

I asked him when he knew. When did he know that she was the one? He said that she took all her friends to New York by train in a club car to attend a party her brother was giving. She invited him to be her date. On the way back they all stopped for breakfast at Aunt Marge’s farm near Philadelphia. Many of my mother’s cousins were there and my dad fell in love with my mother’s family. It was the first inkling he had that if she became a Hopkins, he was going to be an Elliott. That’s how it works in this family. At its best, this is an inclusive family and no one was more inclusive than my mother. Her rule was simple: if you say you are one of us, you ARE one of us.

By chance she only had four children. She’d always wanted six, like Grandma Elliott, but she once wrote for her writing group, “The good Lord knew what he was doing by just giving me four— especially the four I had.”

She stuck by us no matter what. Her parenting philosophy was that love trumps supervision, and her mother-love was fierce. When we got into scrapes (and we did) she was philosophical: “You paid your tuition; I hope you got an education.”

Her rules were simple: be polite, don’t pout, and be home for dinner. Those rules extended to the many people who ended up living in our house. And there were many. Coming home for dinner was no hardship and our friends loved coming home with us. My mother was an amazing and adventurous cook. She grew a lot of her own vegetables. She, with my dad, presided over the stories and antics at our dinner table. Many of our family jokes were really punch lines of stories that had been told over and over:

“Never get married and have children.”

“One streetcar later and none of this would have happened.”

My mother could laugh at herself. And did. When my parents were stationed in the Middle East, they had a weekend house in Jericho. The house was set upon terraced land at the foot of the Mount of Temptations. The veranda led to the roof of the tool shed that stood on the terrace below.

They often entertained guests there, and on this particular Sunday, my parents were entertaining a congressman from Washington. We were told to “comport ourselves with decorum” and we did our best… until my mother stepped just beyond the veranda and said with her most elegant elocution, “And here we have a view of the Jordan River.” And then she disappeared through the roof of the tool shed. Whoosh. She was gone. Disappeared. We couldn’t see her– we could only hear her laugh. We started to laugh. We couldn’t help it and we couldn’t stop; we held on to each other and couldn’t move. We were helpless. The congressman looked horrified. My dad, by then also trying not to laugh, shrugged and said with great flourish, “Now you see her, now you don’t.

No one was laughing harder than my mother. Dad walked over to the gaping hole the roof and said, “WHOA Sparks, you all right down there?” She shouted up, “Couldn’t be better!”

My mother was ingeniously generous. One morning, when I was about nine, she said, “I have a surprise for you when you get home.” I knew it would be good. When I got off the school bus that afternoon, there it was: a brand new bike on a kickstand. Actually there were four brand new bikes on kickstands, because there were four of us. No doubt she had pulled each of us aside and told us that she had a surprise for “just for us.” That’s how she worked. We were thrilled, but it turned out that the real surprise had been for my father.

That week, he’d worried about bringing home important visitors for lunch, and this was to be the day. His concern was not unfounded. Though she had great taste, my bohemian mother, with her flower child heart, cared more about self-expression than decor. My dad fretted, but my mom had a plan. When he went off to work that day she alerted the trucks that waited around the corner. They sprang into action and unloaded and installed new draperies and carpet. They unloaded and arranged new furniture. They unloaded four brand new children’s bikes.   They took the old furniture away and when my father and his guests arrived, the new table was set, lunch was ready, and he stood in a room he didn’t recognize. His favorite record—“Round Midnight” by Thelonious Monk— was playing on a new Victrola, and he couldn’t say a word in front of the guests. He told me that somewhere in the middle of the meal he stopped worrying and started enjoying what my mother had created… just for him.

My mother was adventurous and fiercely dedicated to her family. As each grandchild graduated from high school, they went on cruise with mom. These adventures took them all over the world. She took all of us to Capon Springs every year, a place she dearly loved. She made sure that everyone could afford to go to our annual Elliott Family Reunion. Her idea of family was expansive and she was so encouraging to so many. Thomas Wolfe said you can’t go home again. He hadn’t met my mother. She kept home alive for all of us.

My mother understood acceptance. She watched two of her children die– our sister Elliott and our brother John– both incredible people. Her heart broke, seemingly letting more light in and more light out. When I asked her how she could not only endure this, but go on with her life, she explained that she was honored to be there when they each took their first breath and it was an honor to be with them at their last.

“What did you do, Mom?” I felt the discomfort that comes with worry. She said, “I waited for my angel. It didn’t take long. Someone came through the door and held it open for me. And I reminded them, ‘When you need an angel, you get an angel.”’ Mom lived with angelic force and had faith in the economy of Grace. She never wavered. Over and over, even at the end of her life, she marveled at how lucky she was.

A little over a month ago, she found out that what she’d been calling gas pain was Stage 4 pancreatic cancer. She was matter of fact and pragmatic. “I want to go to movies, I want to see my people, I want to teach cheerfulness with my last breath.”

My brother Charlie and I, along with Ben and Teri, were honored to help mom write her last chapter just the way she wanted it. And many of you, friends and family, helped us do it. We did go to movies. We had big family dinners, and walks with great grandchildren and bubbles, and dancing in the living room.

Mom was a radiant mix of the luminous with the numinous. When asked how she was, she always responded with “Better than I know how.” And she meant it. Her wish was to die at home with family and friends around her. She said over and over how lucky she was that this wish was coming true. I gathered her words in a notebook that I kept close by.

“People give what they have to give.”

“People do the best they can.”

“It takes a special family to produce such people.”

And she said, “Everybody has to die, but it is nice if illumination of character shows up in the end.”

She was a wordsmith, but she spoke most boldly with her life. Her last breath was her last word — punctuation on a life lived well. And yes, she did it: she taught cheerfulness with her last breath.

What was she trying to say with her life?  It is my task to come as close as I can to putting it in words.  I think it is this:

“Go forth and choose joy. It’s waiting for you.”

7 Responses to A Life Speaks