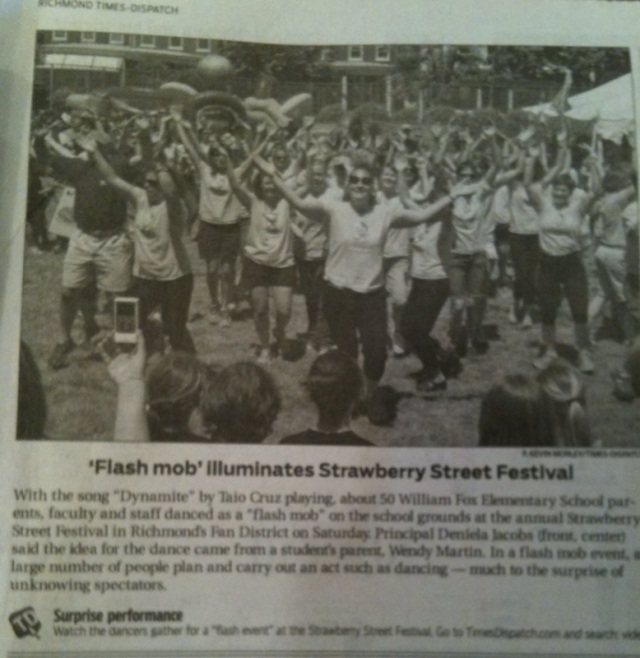 Last week was Teacher Appreciation Week. One of the cards that I will always treasure said, “I love how you put yourself out to us and humiliate yourself in front of us, but don’t really care that you did it.”

And I thought they hadn’t noticed.

It is true that I will go to great lengths to make a point.  I might break into song at unexpected moments or teach history with weird accents or become (momentarily) the person we are studying.  Though I spend hours preparing and planning for school, ultimately each day is a day at the improv– in a g-rated glee kind of way —  I just go with it.

But every now and then, I am given an opportunity and I hesitate.  Suddenly self-conscious, I freeze. This happened a couple of weeks ago when I was invited to come to the top-secret rehearsals to prepare for a flash mob at the Strawberry Street Festival. Wendy Martin, Fox parent, had a vision to engender support for our public schools and wanted me to be a part of it. No way.  What seems whimsical or cool in your twenties and thirties and even forties, is just downright eccentric in your fifties, and decidedly uncool. No. No way. I couldn’t.

But then… I started watching my third graders with their raffle tickets for the Strawberry Street Festival.  They were reluctant. It was hard, they said, to go up to strangers and ask them to buy a ticket.  We talked about all the things the money went for.  Special art programs, classroom programs, trips, tutoring programs, support and appreciation for others… I told them just to start with what they cared about the most and then it wouldn’t be so hard. After a very slow start, they were creeping up to first place in raffle sales.

“We don’t have to be in first place,” I told them, “But I want every one to care enough to participate.  Stand up for the things you care about, and learn to help others care, too.”

Their cheers could be heard all over the school when it was announced. They kept selling. They positioned themselves in coffee shops, and at sporting events, and they went door to door. They talked about how much they loved our school. And they held the number one spot.

I was approached again and again about the flash mob. I shrank back, resisted, and shook my head.  I found out Amelia’s mom was willing to be the first one to start the dancing.  She was that brave. Then I heard that our principal and assistant principal were willing to be in the front row. But I just couldn’t. No.  Not even the back row.

I had coached, prodded, pleaded, and cheered as they went out and sold those raffle tickets, because I wanted them to be able to act behalf of something they cared for.  Yes it involved risk of rejection, feeling foolish, and humiliation.

Something you care about is worth that risk, right?  Wait.  What was I saying?

I love how you put yourself out to us and humiliate yourself in front of us, but don’t really care that you did it.

I slinked into the back row of the top-secret rehearsal.  I’d missed the first two.  I caught up as best I could and practiced at home with the video.  Even the rehearsals were scary.

The day came.  Flash Mob.  In the middle of the festival, we broke out in dance to Dynamite by Taio Cruz.  It was a blast. It was so much fun to be with a group of parents, administrators, and teachers who cared that much. I was terrified that I would make mistakes and I did.  But we finished strong.  With jazz hands.  And with signs that read: “Support our community, Public is priceless, Richmond Public Schools”

Too cool for school?  Not me.  This week I learned that it is super cool to care.

13 Responses to It’s Cool to Care