The Sweet Smell of Roses 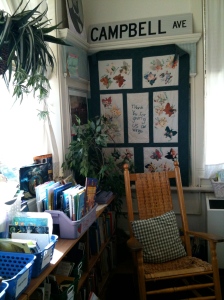 Yesterday, I sat in my rocking chair beneath the Campbell Avenue sign and read The Sweet Smell of Roses by Angela Johnson to my third graders.  This book is a tribute to the children who marched with Dr. Martin Luther King, Jr.  It was a perfect day to read it.

Many of the children who sat before me on the rug,  had stood beside me at the General Assembly Building the day before.  As we discussed the title, the children spontaneously broke into song.  They sang the freedom songs they’d been singing in music with Mr. Winslow: “Oh, Freedom,” “Ain’t Gonna Let Nobody Turn Me Around.”  There are sacred moments in a classroom and this was one of them.

I didn’t steal the sign that hangs above my rocking chair in Room 204.  It is a replica of the street sign on the Avenue that runs through Shirlington in Arlington.  We were given this replica when the street was renamed after my husband’s parents,  Edmund and Elizabeth Campbell, to commemorate their contributions to Virginia and Washington.  We decided it would be most appropriate to place it in my public school classroom.   I love that it is there.  The sign prompts history to be told.  I could tell a love story about my in-laws, and every word would be true, but that love story is part of a bigger story.  This story is about two citizens who made a difference in the world in which they lived.

I told their story last week.  I told of an educator and a prominent lawyer who worked tirelessly for the rights of all citizens.  I told how my father-in-law argued one of the cases that finally knocked out the massive resistance laws that segregated education for so long in the state of Virginia.  I told how my mother-in-law worked hard to be the first woman elected to the school board so she could stand up for the rights of children…  and how she later  started educational television in Washington (WETA).  I told the story of how my in-laws stood up for what was right in a time when it was costly to do so.

In teaching history, “then” becomes a lens for now. I explained that as citizens we can all make a big difference in little ways by standing up for what we believe is right. I shared with my children that I’d written letters to our representatives about the injustice of proposed school funding cuts that would abolish preschool, school breakfast, and would increase class sizes.

On Friday afternoon, as we streamed out of the school building towards the weekend, Sarah Gross was handing out flyers for a “Save Our Schools” rally at the capitol.

Save Our Schools.  It had a familiar ring and it took me a while to remember why.

Holding the flyer in my hand,  I knew I would attend this rally and hoped the parents of my students would find out about it, too.  I decided to do my part to make sure they did.  I invited parents and children to join me.

On Sunday we stood across the street from the General Assembly building and chanted. “Save Our Schools.”  “Freeze the LCI.”  “Tax cars, not kids.”  The capitol police were friendly and helpful.  They are parents, too.

As I stood with my husband, I couldn’t help but think of his parents.  I looked at the crowd — at the many children holding signs they’d made themselves — and I realized something.  When concerned citizens come together to protect the rights of all people, it is a love story.  It is a love story that makes a difference.

9 Responses to The Sweet Smell of Roses