Did Christopher Newport Have a Parrot?

Posted on February 8, 2010 by Annie Campbell 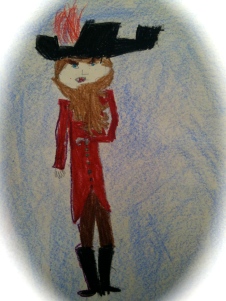 I had just finished describing Christopher Newport, the explorer who brought the first colonists to Virginia.  I explained that he had been the prototype for J.M. Barrie’s Captain Hook; and that he lived in the time of Shakespeare and that Shakespeare had been inspired by the story of his shipwreck on the Sea Venture to write The Tempest.

When I was in fourth grade, I was given a history book on the first day of school.  I was hooked from the first sentence:

The story of Virginia began with a little boy.  His name was Sir Walter Raleigh, and he lived in England.

I could imagine myself sitting on the shore, staring out at the water, and imagining a new land.  The story tapped into my sense of discovery and desire for adventure. I read most of the book the night it was issued.  I wanted to see how the story turned out.

King James claimed that Virginia belonged to him because he was England’s king.

The truth is that the land I lived on did not start with a little boy who lived in England.  Nor did it belong to King

James because he was England’s king. There was a rich culture here long before the Europeans knew it existed.   The textbook never said that.  Just as it never said that the “servants” brought here by the colonists were not here of their own free will, or that they could not come and go as they pleased.

It was 1964.  As I was learning Virginia’s history in a segregated classroom in Williamsburg, Virginia, a debate raged in congress. President Johnson and Hubert Humphrey (heroes in my household), were fighting to get the Civil Rights act passed. Americans, black and white, risked their lives to get it passed. And hatred raged.  I never heard a word about it in school.

The men hurried on deck to see their new country.  It was four o’clock in the morning.  A sweet smell came over the water.  It was the smell of the land in spring when trees and flowers are in bloom.

Virginia’s story is not finished… for history is made of living people.  The children of today will be the men and women who will the history of tomorrow.  They will be the people who must continue to work for “life, liberty, and the pursuit of happiness” for all people everywhere.

The story isn’t finished.  We reweave it as we tell it.  We are alert to stitches and to whole sections that need to be reworked.  I love the swell of hope in the sweeping narrative of our country, but I know that the real hope is in truth.  Story can be an effective delivery system for truth.  I work to guard against cynicism and disrespect as I tell it.

He could have.  Maybe a parrot befriended him when the Sea Venture was shipwrecked in Bermuda.  Maybe he had the parrot on his arm when he swaggered into the alehouse on the other side of London Bridge… Maybe the parrot said, “Listen to his adventure; he has a story to tell.”  It could have happened, but I don’t think it did.   Let me tell you the story:

Where Fox school stands now,  there was once a deep, dense, dark forest.  Some say there was a path formed over thousands of years by stampeding animals.  This path was used by the native people and led to a river so rich with fish they could be speared. The river was then known as the Powhatan.  In the 1600’s, if you were native to this land and you were standing on the banks of the river on a certain day in 1607, you would have seen a strange looking boat in the distance…  in that boat was an explorer named Christopher Newport…

7 Responses to Did Christopher Newport Have a Parrot?